As life has continued on from my diagnosis, subsequent treatment, news of remission and then moving back into normal life, things have gone extraordinarily well from a physical standpoint. There are certainly some additional aches and pains, but it’s hard to determine if those are residual effects from chemotherapy or the fact that I am closing in on 40.

My scans and blood work are the picture of health. Honestly, the physical stuff was easy (relatively speaking as it relates to chemotherapy). What seems to get lost or perhaps overlooked in recovery is the mental recovery. To simplify it, walking out of a period of time where you are contemplating your own mortality to transitioning back to “normal” life is a monumental task. Throw in a pandemic to make things a wee bit more complicated.

Pre-pandemic I had grand plans of coming out of treatment with a party of my 500 closest friends, traveling and embracing new adventures. Covid said “no sir, we are going to keep you locked in the room you spent battling cancer for the next 18 months”. One of those plans was to attend a First Descents adventure.

One of the “perks” of cancer is connecting with amazing human beings you otherwise may have never encountered in life. I managed to connect with an amazing soul, Katie aka emoji, who after reading my story was the person who said, you HAVE to go on a First Descents program, it was made for people just like you.

One of the “perks” of cancer is connecting with amazing human beings you otherwise may have never encountered in life.

Coming out of treatment I had managed to keep myself incredibly busy by getting back to work, doing virtual volunteer events for LLS and getting back into shape physically.  As I was leading up to my bloodwork and going through the dark months of winter in the midst of a pandemic that showed no signs of stopping, I had what felt like a true breakdown. I could not bring myself to get out of bed. I spoke to several individuals who helped me through that period; my wife, my friends, my family and my professional mentors. Life moved on and I actually felt great about things as the days grew longer and the weather warmer.

In June, I wrapped up my role on the executive leadership team for the Big Climb Philly after the team absolutely crushed it. And then there was a lull. Although it was incredibly gratifying work, it was taking its toll and I was becoming exhausted. I needed a break. It was time for family, work and some true R&R. I felt like I was running on E. Just when I needed it, I got the email that First Descents was offering a program in August within driving distance. I had been waiting for this. I think I filled out that registration within the first 30 seconds of receiving the email. I was stoked but I had plenty to keep me busy in between then and this adventure. Work was crazy, family vacation and there were endless activities that the kiddos deserved. It snuck up on me and about a week away, I actually started to feel anxious about it. Did I set the bar too high? Did I deserve this? What kind of impact would it have on me?

I suffer pretty extensively from what’s known as survivor’s guilt. I think the comparison is the feeling of being in a car accident and walking away from it unscathed while others may not have been as lucky. I feel that way often with cancer. It should have hit me harder. Why didn’t I get as sick as everyone else?

So, now to the good stuff. I headed out on Friday morning with a mixture of both excitement and nervousness, but the excitement was quickly winning out. It was a beautiful drive to central New York while listening to some of my favorite tunes with the windows down.

Of course, I was one of the first to arrive. As I walked up, I really wasn’t sure what to expect, but not surprisingly I was greeted with smiles, air hugs, a few forms to fill out (Covid screenings, yay) and the most contagious, memorable laughs that I was going to be flooded with for the next 48 hours. After some friendly hellos, I checked in, unpacked, and sat in my room for about 30 seconds before realizing I was about to talk to the people I had been dreaming about meeting for so long. I was going to soak up every last second with these people. No. MY people.

Before I go on, one of the things that really dawned on me was this realization that with my treatment ending (ended March 8th) and the pandemic starting (lockdown in Philly March 16th), I never had a chance to connect, in person, with other individuals who have experienced cancer. Yes, I’ve connected online with many people that I truly love, but still have yet to meet, to hug, and to share laughs with. It’s almost as if, in a way, I never left treatment in my mind. The pandemic served as my second part of treatment. First Descents felt like as much of a milestone in my treatment as my scans and blood work. Actually maybe more significant.

It’s almost as if, in a way, I never left treatment in my mind. The pandemic served as my second part of treatment.

As more folks were arriving and I was letting everyone back home know I was unplugging for the next few days with the hashtag #cancerperks, I overheard Rainier telling a newly arriving survivor, “…this is just one of the perks of having cancer” and I yell with elation, “Oh man, I literally just signed off saying I was taking advantage of a cancer perk”. And she turned to me and said, welp, we know your new name Perks.

Prior to leaving, I had reached out to Emoji (the person who intro’d me to FD) to let her know how excited I was for this. She told me how excited she was for me, and although I would absolutely love the adventures, the campfire is what is truly special.  She was not wrong. Emoji inspires me to pay it forward. To be a guiding light for those who might be in the midst of darkness.

We were all arriving and settling in. We ate a delicious healthy dinner.  We played some cornhole, chatted and had an introductory talk, but then we headed down to our campfire. The lights were dimming and Rainer, who can teach a master class in bringing people together and allowing them to get to their level of comfort at their own speed, posed a question for us to open the discussion. There was some hesitancy to be the first to speak, but finally someone who I would lovingly get to know as BAMF (the first two words are Bad Ass, I’ll let you guess the second two) started speaking. It was as if she was literally reading the script directly out of my brain. I immediately had tears in my eyes, thank goodness it was already dark. That moment, that feeling of “oh my god, these are my people”. That was enough right there to know that I can speak openly from the bottom of my heart. There was so much to let out. And over the course of the next 48 hours there was so much that was purged from my mind.

The bonding and openness is something that is incredibly hard to describe unless you have experienced it before. It’s actually something I never quite fathomed or thought possible.

The rock climbing was absolutely amazing. The guides were amazing. The experience was amazing. Rex brought up a point near the end saying that she thought that we were all going to be treated with kid gloves since we are a bunch of oncology patients. Oh no, not at all. I can confidently say we all did things that I’m not sure any of us thought we were capable of. They pushed us and it was wonderful.

I am not going to go too much into rock climbing, but if you haven’t tried it, I highly recommend it. I have no doubt I’ll be out there again soon and would be more than happy to go with anyone interested.

What I do want to go into is the people. We covered the gamut. We ranged in age from 19 up to 41. Breast cancer, Leukemia, cervical cancer, lymphoma. Men and women. They all inspired me in so many ways. On our second campfire night, Rainier posed the question (after an hour or two of poo stories…yes, you know you are with your people when you’re having those conversations after only knowing the group for 24 hours) of what are we going to take away from this. Uni and Hug-O really hit the nail on the head. A genuinely restored faith in humanity. A truly full cup. There is so much going on in the world that it can be hard not to feel anger or frustration or sadness. We all needed this very badly in our lives. To know that I walked away from this experience with 10 new lifelong friends in such a short period of time is something I will cherish forever.

Thank you all for truly providing me with a life changing experience that will stay with me forever. You are all beautiful, wonderful, big hearted people that I am now honored to call my friends. I needed this. We needed this and I couldn’t imagine a different group of crazy people to share this with.

I’ll throw out all the cancer clichés, but step out of your comfort zone and try something new, live each day, love those around you freely and never underestimate the impact your words and actions can have on those around you.

This year, we’re hitting (re)set on the pandemic. With brighter horizons ahead, we’re focused on renewing, recharging, reconnecting and rediscovering adventure in the year ahead.

In 2022, First Descents will provide more than 40 Week-Long Programs serving over 500 young adults impacted by cancer and multiple sclerosis, healthcare workers, and caregivers. Give the gift of adventure this holiday season and help us reach our $250,000 fundraising goal. To donate today or set-up a (re)curring donation, visit our website here. 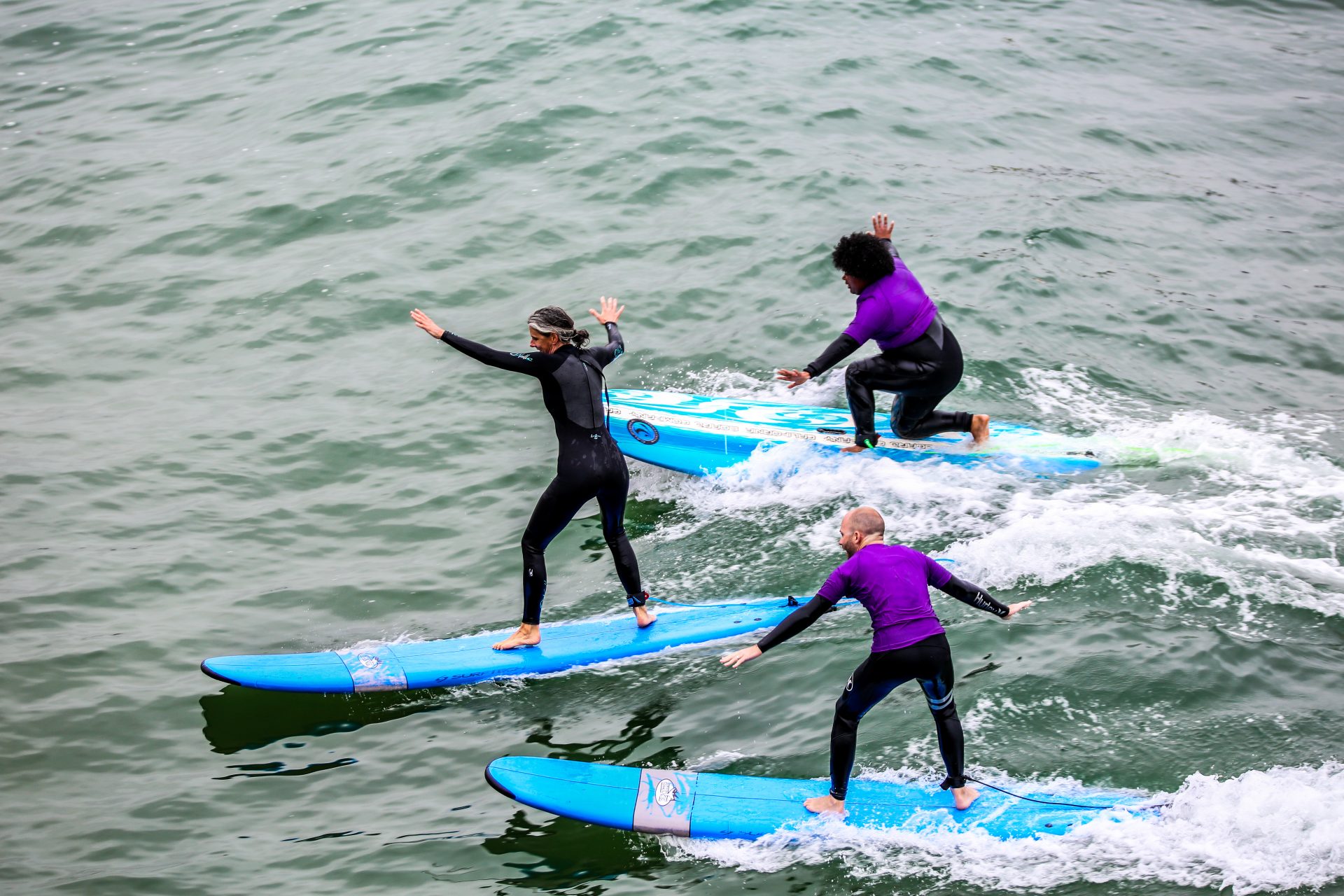 Feeling Alive and Learning to Thrive